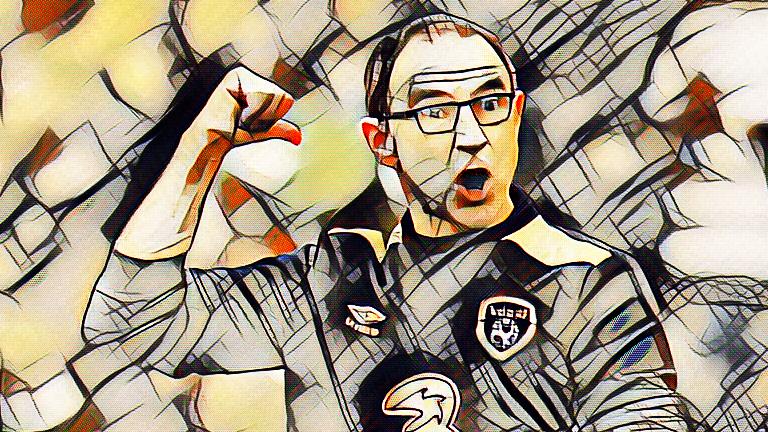 After an absence for a few weeks we return with our series on Irish League players who have also made their mark on the professional game across the water and we return with a football figure who needs no introduction to anyone. We have become so accustomed to seeing Martin O’Neill jumping around on the sidelines for the last number of years that it is easy to forget that he was a half decent player in his day, as he was quick to point out to Adrian Chiles when on punditry duty for ITV at the 2014 World Cup. Let’s take a look at how the man born into a family of nine made it in the bigtime across the water.

Football was clearly in Martin O’Neill’s blood, his father was a founding member of his local GAA club in Londonderry were two of O’Neill’s brothers also played and were part of the Derry senior side that won the 1958 Ulster Championship and reached that year’s All-Ireland Championship final. O’Neill was a GAA player himself and represented his school but eventually, he turned to football and signed for South Belfast based side Rosario, a conference room is now dedicated to O’Neill in Rosario’s local youth club, before joining Distillery. At the Whites O’Neill was part of the side that won the Irish Cup and he scored two goals in the 2-0 final victory over Derry City, the second goal seeing him beat three players before letting rip, and the following season he scored when the the Belfast based side met Barcelona in the European Cup Winners’ Cup. Around this time O’Neill was spotted by a scout for Nottingham Forest and in October 1971 O’Neill took the plunge by giving up his law studies at Queens University and making the move into full-time football with Forest, Distillery received a few of £15,000 for his services.

O’Neill made his Forest debut against West Brom, the month after he signed, and made an instant impact as he scored in a 4-1 win. O’Neill continued to establish himself that season and clocked up 17 appearances but unfortunately things didn’t go so well for Forest on the pitch as they were relegated to the Second Division. Forest had a couple of mediocre seasons in the Second Division and O’Neill eventually submitted a transfer request but in January of 1975 a certain Brian Clough was appointed the clubs new manager and things would soon change in a way no one could have ever expected.

Clough set about building his Forest side and led them to 16th and 9th place finishes in his first two seasons with the club, with O’Neill being brought back into the fold after his previous desire to leave. In the 1976-77 season O’Neill and Forest won the Anglo-Scottish Cup, beating Leyton Orient 5-1 on aggregate in the final, their 3rd place finish that season was also enough to see Forest and O’Neill back into the First Division but the best was yet to come. Just a year after getting promoted to the First Division, O’Neill was a key member of the side that went on to win the league title as well as the League Cup, another victory in the League Cup was to come the following season but Forest managed to pull of the unthinkable by beating Malmo in the final of the European Cup in the 1978-79 season. O’Neill was only fit for a place on the subs bench in that European Cup final but a year later he started the match as Forest went up against Hamburg in their second consecutive European Cup final and brought the trophy back to England once more, O’Neill and Forest had went from the Second Division to First Division champions and back to back European Cup winners in 3 years, in what is still regarded as one of the greatest footballing, possibly even sporting, achievements of all time. O’Neill also added a Charity Shield and European Super Cup to his medal collection before leaving Forest in 1981. In his later years he would play for Norwich, Manchester City, Notts County, Chesterfield and Fulham before retiring.

After retiring from paying O’Neill moved into management and had stints in charge of a couple of non-league sides before being appointed Wycombe Wanderers manager in February 1990. O’Neill’s time in charge of the Wanderers proved to be highly successful as he won the FA Trophy twice with the club, 1991 and 1993, and also led Wycombe into the Football League for the first time in their history during the 1992-1993 season. The success continued into the following season as Wycombe made it to the playoffs, were they beat Preston in the final to make it back to back promotion and O’Neill went close to leading the club to a hat-trick of promotions but they narrowly missed out on the chance to get promoted to Division 2 and in the summer of 1995 O’Neill parted ways with Wycombe and accepted the managerial job at one of his former clubs, Norwich City.

O’Neil took over just after the Canaries had been relegated from the relatively new Premier League into Division One but he wasn’t to be the man to lead the club back to glory as disagreements with Chairman Robert Chase seen him leave the club in December 1995, just a few months after joining, Chase would resign himself soon after due to supporters unrest. O’Neill wasn’t out of work long as he was soon appointed Leicester City’s manager and got them promoted to the Premiership at the first time of asking via the playoffs. O’Neill went on to establish Leicester as a Premier League side, they never finished below 10th under his leadership, and also won the League Cup twice and took part in the UEFA Cup. O’Neil left Leicester at the end of the 1999-2000 season and moved north of the border, taking over the reins of one of his boyhood clubs Glasgow Celtic.

O’Neill took over at Celtic Park following the disastrous John Barnes era, arch-rivals Rangers had dominated the Scottish game in the 1990s and had one another title the season before, finishing 21 points ahead of Celtic. O’Neill’s first Old Firm game resulted in a 6-2 win for his new side but Rangers would win the next one 5-1, O’Neill and Celtic would have the last laugh though as in his first season with the club O’Neill secured a domestic treble, the first time this had been done since 1968/69. Celtic retained their title the next season, for the first time since 1982, and also qualified for the Champions’ League group stages and O’Neill was even linked as a possible successor to Alex Ferguson at Manchester United. In the 2002-03 season Celtic made it to the UEFA Cup final were they lost out to FC Porto, managed by none other than Jose Mourinho. O’Neill announced that he would be leaving Celtic at the end of the 2004-05 season to spend time with his ill wife and departed Celtic as their most successful manager since Jock Stein, with three League titles, three Scottish Cups, and a League Cup.

O’Neill was believed to be a candidate to take over the England managers job after the 2006 World Cup but missed out on this position and was eventually appointed Aston Villa manager in August 2006. O’Neill spent four years in charge of Villa and improved their fortunes as they regularly qualified for Europe under his guidance but he ultimately couldn’t deliver any silverware, coming closest in his final season when Villa lost to Manchester United in the League Cup final, and nor could he break into the top four sides in the Premier League. O’Neill stunned Villa and the football world when he resigned as manager just five days before the start of the 2010-11 season due to disagreements over transfer funds.

O’Neill spent about 18 months out of football but in December 2011 he was back in management again as he took over as Sunderland’s manager, his brief was simple; avoid relegation. O’Neill got off to a great start with wins over Blackburn and league leaders Manchester City and he kept the north-east side up comfortably but unlike his previous jobs he couldn’t push on the following season and was sacked in March 2013 with Sunderland just a point above the relegation zone.

O’Neill’s next move was into international football as he was confirmed as the Republic of Ireland’s new manager and led the nation to the European Championships 2016 were they lost out to France. A successful 2018 World Cup qualification campaign followed and O’Neill’s men made it to the playoffs but were thrashed by Denmark. Just this week the FAI announced that O’Neill has signed a new contract that will see him through to the end of the 2020 European Championships.

O’Neill has also been recognised for his achievements outside of footballing circles in, 2004 he was given an OBE, in 2013 he was given the Nottingham Lifetime Achievement Award and in 2017 he was given an honorary Doctorate by Ulster University, not bad for the player who once scored two goals in an Irish Cup final while playing part-time football.