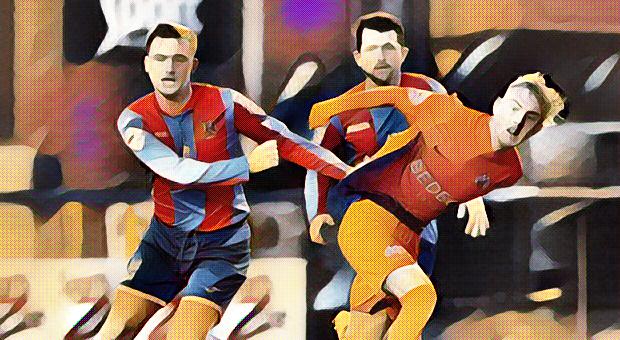 Our first Player Watch for 2018 alights on the the first Ards Player Watch also of the season. Kyle Cherry in central midfield is our subject and he lines out across a fairly physically small quartet. He indeed started life at the Oval and Ards set about trying to acquire their second win of the season at the Oval after a few heavy defeats.

His first actions showed plenty of intent. Whilst he lost out on an early header to Marcus Kane he showed he had plenty of spring in his leap and was first to the resulting loose ball. He was keen to try and find space between the more advanced O’Hanlon and deeper Kane in Glentoran’s midfield and occasionally this resulted in him being unable to get back quickly in counter attack situations. One of these could have been costly however Glentoran’s shot went over the bar. However a lobbed ball he tried down Glentoran’s left was sharply returned and he was diligent in tracking the ball all the way back and making the tackle which was admirable.

There wasn’t too much football in either midfield being played and he was winning the occasional header with that spring still evident. When he did get a hold of the ball he did look to play the ball into wider space and bring full backs into play. One or two of these passes might have been a little more accurate .. for example a pass to Cameron Stewart which sailed into touch, but it was clear to see that he was always trying to link play and help out men in possession.
His tempo and concentration appeared to drop a little after the first quarter of the game but this may well be to frustration due to the ball continually flying over the midfield no man’s land. It also resulted I felt in his being pulled out of position by the likes of Glentoran’s winger who was happy to come in off his wing though this could have been under instruction.

Primarily right – footed he was good at taking the sting out of a few situations with a simple and tidy pass to a man in space and in doing so brought a moment’s peace to the hustle. As the first half went on Ards got more of a grip on the game and better movement from his team allowed better penetration. He started getting into the opposition penalty box on the back of this and after winning a header followed up only to concede a free kick by cheekily standing in Elliot Morris’ way.

He was caught out by getting sucked into play far too far up the pitch and a reverse pass not only took him out but the guts of the Ards midfield. But by and large his contributions were positive the closer he was to the Glentoran eighteen yard line. An excellent wall pass enabled a flowing Ards move to be maintained. He came to prominence somewhat intercepting a poor pass from the opposition that had them back pedalling as he drove forward. He took a hefty tackle from Calum Birney for his trouble and annoyed the crowd by being up on his feet as soon as his antagonist had been booked. Undeterred by this he charged again into the box to be unceremoniously upended recovering a header so nothing wrong with his bulldog spirit.

He curtailed a Curtis Allen movement very well to protect his back four and his game seemed to become more relaxed as Ards as a team found their feet. He was more than happy to lend himself to his attack as well as he shaped to shoot at the edge of the penalty area only to give a short pass to a colleague which thoroughly changed the character of the attack. Whilst that did not materialise he then opted to move the ball wide again as and as in previous moments in the game it tended to be from the left to the right of the game.

His play became more valuable as the game wore on…..beating Kane to a loose ball and then that spring in the air that we mentioned earlier became an assist. A long ball down into the Glentoran right would not have had many people expecting him to win the header against the opposition centre- half. But win it he did and the contest critically had drawn the Glentoran right – back out of position as well. The resulting space and ball enabled Keke to open the scoring for Ards.

A second Ards goal naturally changed the dynamic of the game and he settled nicely into a fulcrum passing role in the middle of the pitch, occasionally setting off on a driving run only to be outnumbered. He had put a lot into the game and having  taken a fair buffeting and  more than done his bit was substituted with about eight minutes to go. He will have been pleased to have seen his appearance in the Sunday Life team of the week.