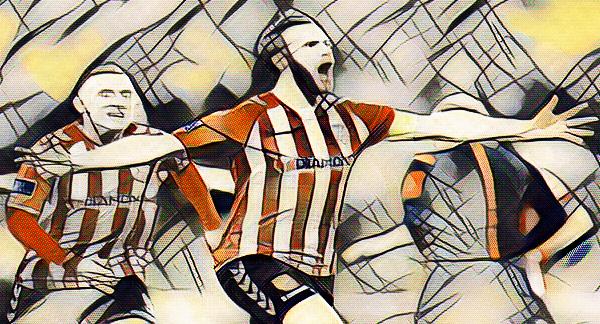 If there was any tension in the stands of the refurbished Brandywell Stadium after a hugely disappointing 6-1 loss to Shamrock just days ago, it was far from visible as the boys in Red and White bounced back in style with a 5-0 thrashing of Limerick, with Ronan Hale picking up a hat-trick to go with second-half goals from forward Ronan Curtis and captain Aaron McEneff. It had been a long time coming for Derry City, but on an emotional night for all involved, the side did themselves and their city proud.

The long-standing era of the world-famous slanted pitch – which has played host to some of the world’s best over the years in the likes of World Cup winner Ronaldinho – has finally come to an end, a remarkable aspect of the Brandywell that has come to haunt countless players over the years, friendly and foe. Other top stars have also graced the once-peculiar playing field, with Manchester United and Real Madrid both making the trip to the Brandywell in glamour friendlies, while Paris Saint-Germain were once visitors to Derry City in the 2006 UEFA Cup, although no-one may have come close to the talents of their very own ‘Derry Pele’. However, the glistening new 3G surface has now introduced another era, one which boasts a slick new arena and one which more importantly has started in fantastic fashion.

The all-seater stadium will be a new experience for the Red and White Army, who were forced to follow their side’s home games at Maginn Park last season, but the atmosphere certainly won’t be affected. The boisterous crowd were treated to a sumptuous display from their team, who admittedly haven’t had the best start to the campaign with three losses and just one win from their first four games. The mood however wasn’t affected, with fans in full volume and paying their respects in the presence of the family of former forward Mark Farren – who sadly lost his life in 2016 after a lengthy battle with cancer – and Martin O’Neill, who officially opened the new stand named in his memory at the beginning of the game.

Manager Kenny Shiels – previously of Scottish side Kilmarnock and Northern Irish sides Coleraine and Ballymena United among several other clubs – is now well underway in his spell at Derry City, having worked his magic to guide a youthful squad to third place in his first season in charge, followed by fourth place in a hugely competitive 2017 season, with European football also among his recent success at the club.

The talented young squad meanwhile have already experienced several highs early in their careers thanks to countless fantastic results and performances, yet have also endured the lowest of lows after the death of captain Ryan McBride, who also tragically passed away in his sleep last year at the tender age of 27, sending shockwaves throughout the entire city.

A hugely influential figure, ‘Mr Derry’ epitomised everything about this wonderful club, having lived just across the road from this historic stadium, and for the current group of players – many of whom still young adults – it has been an incredibly tough time, yet they know their leader is watching over their shoulder with every step they take on this hallowed turf.

The sold-out venue paid their respects to their beloved McBride and Farren as they lit up their phones in the 5th and 18th minute respectively, recognising the impact these top footballers had on their side and indeed their city, with the club also showing their class by retiring the number 5 and 18 in memory of their lost sons. The fitting victory was simply meant to be, and represents a huge stepping stone for a side with all the ability to challenge for a league title, yet one that must now summon their inner-lying courage and determination to drive them back to the top.

The old Brandywell stadium and all that it entailed will never be forgotten, and while the new-look arena will undeniably have a new and possibly alien feel about it, the team and its supporters are more than ready to make new and long-lasting memories with this special club.