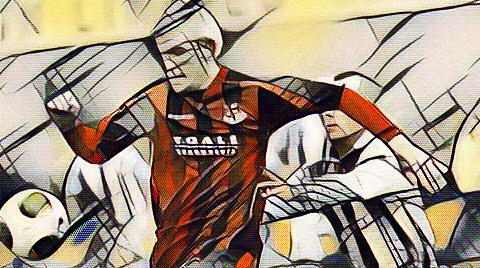 In these articles we’ve been looking at success stories of players such as George O’Boyle, Keith Gillespie and Rodney McAree who have players in Northern Ireland and succeeded across the water, but unfortunately for every player who has ‘made it’ in the professional game there are players who didn’t quite make the grade across the water and Andy Smith is one player who would fit into this category.

Smith started his career with Ballyclare Comrades in Northern Ireland’s First Division (now Championship), Smith scored 3 goals in 9 league appearances for the Comrades during the 1998-99 season and earned himself a move across the water to Sheffield United in September 1999. Smith didn’t feature for the Blades during the 1999-2000 season but he did get some first-team football during a loan spell with Bury but was unable to find the back of the net in three appearances before returning to Bramall Lane. Injuries halted Smith’s progress and in total he only made 10 appearances with no goals in total for the club and during the 2000-01 season he returned to Northern Ireland when he joined Glenavon on loan and scored 4 goals in 15 appearances before returning back to the Irish League permanently when he signed for Glentoran in February 2001.

In the remainder of the 2001-02 season, Smith made 12 appearances and scored 3 goals for the East Belfast side before going on to establish himself as a key player and a fan favourite the following season. The 2002-03 season was a great one for Roy Coyle’s Glentoran side and it wasn’t a bad one for Smith, the striker banged in 35 goals in all competitions. Smith’s goals helped the club to a league title, a County Antrim Shield and a League Cup but they missed out on winning a quadruple as Coleraine got the better of them in the Irish Cup final. Smith’s from caught the attention of then Northern Ireland manager Sammy McIlroy and he was called up to play for the Northern Ireland B team against Scotland in May 2003 and a senior call up to the squad to play against Italy soon followed in June 2003. 2003-04 was a less prolific season for Smith as he was sidelined for parts of the season due to injury but he still managed 7 goals in 23 appearances as well as further international caps. In what was to be Smith’s last game for the club he avenged the previous season’s Irish Cup final defeat as Glentoran beat Coleraine 1-0 to secure the trophy. That summer Smith made a move back to England by signing for Preston North End, Smith would link up with Northern Ireland team-mate David Healy at Preston and it was said to be Healy who recommended Smith to manager Craig Brown.

In his first season with Preston Smith played 17 games but failed to score and was sent out on loan to Stockport County, now managed by McIlroy, in a bid to boost his confidence levels but he returned to Preston after  just 2 appearances and still no goals. Smith spent 18 more months at Preston but never played for the club again after that first season and spent time on loan with in Scotland with Motherwell, who were managed by former England captain Terry Butcher at the time, and Cheltenham, with supporters helping pay Smith’s wages to make the deal happen but once again these proved to be frustrating spells for Smith as only a handful of appearances  came his way and still Smith was waiting for that all elusive first goal in professional football (you’re getting the theme here no doubt).

In January 2007 Preston cancelled Smith’s contract and he was free to sign for Bristol City, Smith played 11 games for the Robins in the remainder of the 2006-07 season as they won promotion to the Championship but Smith, once again, failed to score any goals and left the club at the end of the season. Smith decided to return home to Northern Ireland and there was plenty of interest in his services but after lengthy contract negotiations Smith signed a short-term contract with Portadown in October 2007. Smith started life at Shamrock Park very well and started showing signs of the form he had shown previously in the Irish League but left the Ports two months later when his deal ended. After failing t get a deal elsewhere Smith returned to Portadown in February 2008 and signed a contract through to the end of the following season, in total he made 16 league appearances for the Ports during 2007-08 and scored 9 goals but at the end of the season Portadown were relegated due to an off the field administration error and when Smith refused to train his days at the club were numbered.

Smith was still contracted to the club for another year so Ronnie McFall refused to cancel his contract and Smith spent a year out of action before signing for Ballymena United after a trial at Grimsby. Smith spent two seasons at United making 48 league appearances and scoring 7 goals before moving on to live in Vietnam, before spells with Carrick Rangers (he signed and left within a day), Crusaders and ended up finishing his playing career in France.

Since retiring from playing Smith has moved into coaching, linking up with his former Sheffield United team-mate Bruno Ribero for spells in France, Portugal and most recently English side Port Vale.

Unfortunately injuries and attitude problems hampered Smith’s career, which is a shame as when at the correct level he proved himself to be a more than capable goal-scorer.