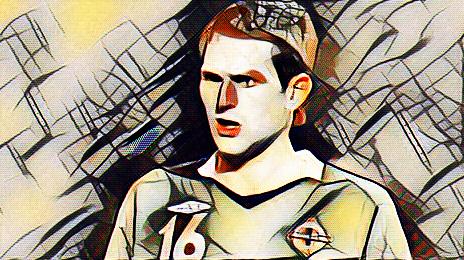 Football is packed full of big name superstars; every football writer and their dog have written a World Class XI some point. However, to some, the game is nothing without its cult heroes. Those players whose names are forever etched in our minds and live on long after whatever flavour of the month has been and gone.

For me, this player was James Quinn. James Quinn was a player who never really excelled at club level. In all honesty, it would be fair to say that he wasn’t vey prolific at International level either but still managed to earn himself 50 caps over a decade with Northern Ireland.

At the time of his debut, and indeed throughout his international career, Northern Ireland favoured the ‘Big Man/Wee Man’ approach and James Quinn fitted the mould of the Big Man with ease. Much like Iain Dowie who he would go on to replace he was English by birth but a Northern Irishman at heart, being eligible by virtue of his parent’s place of birth.

Having made his senior debut in a friendly in April 1996, a substitute appearance in a 2-1 friendly loss to Sweden, he was handed his first start in his very next appearance in December of the same year. By his fourth cap he had his first goal, and what a goal it was! 14 minutes into a friendly with Belgium, Quinn picked up the ball on the left side of the pitch before cutting inside and arrowing a shot into the top corner from over 20 yards out. Sadly, it wasn’t a sign of goal-scoring prowess to come as it represented 25% of his final international tally, all four goals coming in friendly fixtures.

His goal stat is something that is never really considered when the name James Quinn is mentioned. James Quinn was an industrious player, battling hard and putting every ounce of himself into each and every minute he got on the pitch.

Perhaps the lowest point of Quinn’s International career came in a European Championship qualifier against Greece in April 2003. During the infamous record-breaking goalless period, James Quinn earned himself a first international red card with a horrible lunge at Giorgos Karagounis in a 2-0 loss. Fast forward to October 2004 and NI were in a better place under new manager Lawrie Sanchez, however there was more heartache for James Quinn. The big forward earning himself a booking against Austria that would mean a suspension for the upcoming fixture against England at Old Trafford. Quinn was visibly upset with himself, obviously knowing what this match would mean for the fans.

However, it was the following year that played a pivotal moment in Northern Ireland’s football future. That much glorified 1-0 victory over England at Windsor Park in September 2005. James Quinn was to play this time and he made his mark within 7 seconds of the match kicking off. Straight from the off Quinn chased down Ashley Cole and left his mark. This was a vital sign that Northern Ireland were not simply there for the taking and the rest of the match, as they say, is history.

Almost a year to the day, James Quinn would make an appearance in the next giant killing to take place at Windsor Park. Spain were the visitors and Northern Ireland were yet again given no chance by pundits and bookmakers galore. Quinn was a second-half replacement for his Big Man successor Kyle Lafferty and gave his usual bullish effort as Northern Ireland secured an incredible 3-2 win over a Spain side who would go on to dominate World Football in the following years.

By this time, aged 31, James Quinn’s career was on the wind-down. He would only receive one further international cap, a nice round 50th for the bustling forward. A loan spell at Scunthorpe United in 2007 which didn’t yield a single minute of game time was the last year of his playing career.

Upon retirement, Quinn remarked that if he couldn’t break back into the international team he would rather retire and become a fan, cheering on his former international teammates. A cynic would say that it was convenient to pay lip service in this way but anyone who watched the man play wouldn’t have a shred of doubt in their mind that this was the genuine feeling in his heart.

During James Quinn’s time at international level, the Irish Football Association printed the slogan “PRIDE, PASSION, BELIEF” in match programmes and on pitchside boards. If any player typified those three words, in my humble opinion, it was James Quinn.

Every young football fan dreams of hearing the fans singing their name. In reference to his namesake, James Quinn was greeted with “he’s tall, he’s thin, he looks like Jimmy Quinn”, a sure sign of the love and admiration from the Green And White Army.