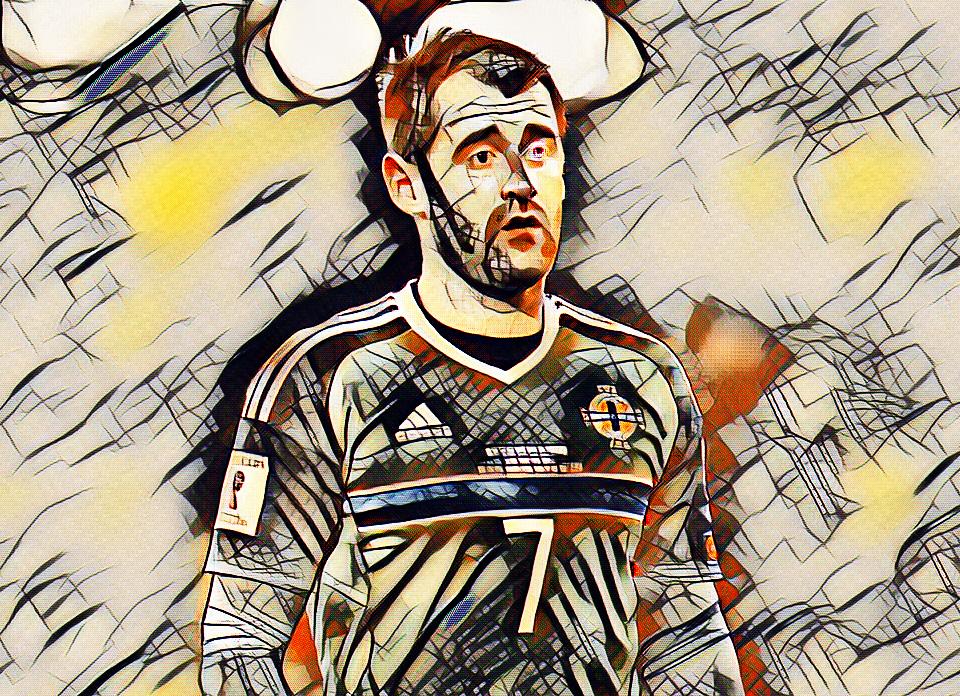 We continue our series on Irish League players to have made the trip across the water into professional football by looking at a player who played club football on both sides of the Irish border, played for Northern Ireland at Euro 2016 and a year ago won his 50th senior international cap.

Niall McGinn started his footballing career with Northern Irish side Dungannon Swifts, where he played as either a winger or a striker. McGinn was also a promising GAA football player and played for Donaghmore and County Tyrone U21’s and at one stage was named the Teamtalkmag Tyrone GAA Young Footballer of the Year, he would eventually give GAA up when he moved into professional football.

McGinn made his league debut for Dungannon in the 2005-06 season and the following season he features more regularly as he made 23 appearances in the league, Dungannon also made it to the Irish Cup final that season but it would prove to be a case of double heartbreak for McGinn as not only would the Swifts lose an entertaining final against Linfield on penalties but McGinn was forced to watch from the stand as he did not make manager Harry Fay’s 16 man squad for the game. Whether McGinn used his cup final disappointment as motivation or not only he will know but the 2007/08 season proved significant for his career as he made 18 appearances in the league during the first half of the season, scoring four goals and was named the Harp Lager Northern Ireland Football Writers’ Player of the Month award for October. McGinn’s performances for the Swifts caught the attention of Derry City manager Stephen Kenny and the two sides were able to agree a fee that meant McGinn took his first steps into professional football when he signed for Derry City in January 2008.

McGinn only spent one season at Derry but made an impressive impact as he made 44 appearances for the team and helped himself to 10 goals along the way. McGinn was also named the PFAI Young Player of the Year as he helped Derry to a 3rd place finish and European qualification as well as the League of Ireland Cup, where he set up Sammy Morrow for the opener before scoring two himself as Derry thrashed Wexford Youths 6-1. It was at Derry that McGinn made his first senior international appearance for Northern Ireland when he came on as a substitute in a friendly against Hungary in November 2008. McGinn’s form for Derry began to attract cross channel interest and he was linked with moves to Ipswich Town, Swansea City and Birmingham City but in January 2009 he eventually signed for Celtic for a fee believed to be in the region of £200,000.

After signing for Celtic McGinn had to wait nine months to make his debut against Dundee United in September 2009, McGinn was named man of the match as the game finished in a 1-1 draw. At the end of October 2009 McGinn scored his first goal for the club as he came off the bench when Celtic beat Kilmarnock 3-0. On January 2010 McGinn was linked with a move to then Premier League side Wigan Athletic but chose to remain at Celtic and made 21 appearances and scored 3 goals during the 2009/10 season. Unfortunately McGinn suffered a broken bone in his foot at the end of the season and this meant he had a slow start to 2010/11 season, his injury coupled with rumours of a falling out with manager Neil Lennon meant that McGinn was often on the substitutes bench during that season and it would prove to be his last at Celtic as the following season he joined Brentford on a season long loan.

McGinn’s loan move to Brentford afforded him the opportunity to play regular football in League One and he grabbed the opportunity with both hands as he made 41 appearances during the 2011/12 season and scored 5 goals, as Brentford missed out on a play-off spot by 6 points. At the end of the season though his time with Brentford and Celtic was over and McGinn was left looking for a new challenge after his contract with the Glasgow side was not renewed.

In July 2012 McGinn moved further north in Scotland when he signed a two year contract with Celtic’s Scottish Premier League rivals Aberdeen. McGinn’s start to his time at his new club was slow to take off and he was stretchered off during his second game for the club against newly promoted Ross County and was ruled out for 4 weeks. McGinn bounced back from this early setback and went on to have a great season for Abderdeen, making 40 appearances and scoring 21 goals in total. McGinn also reached a few club and personal landmarks that season as he scored his first professional hat-trick against Dundee in December and broke the Aberdeen club record for scoring in consecutive games when he scored for the 6th game in a row against Ross County in October. On the pitch the season was disappointing for Aberdeen as they finished a lowly 8th place and Craig Brown stood down as manager in March 2013, being replaced by Derek McInnes but personally for McGinn the season couldn’t have went much better as he won both the clubs Player of the Year and Players’ Player of the Year awards, he was also nominated for the PFA Scotland’s Player of the Year and was subject to interest for clubs south of the border but opted to stay with the Dons and signed a new contract. McGinn also scored his first senior international goal for Northern Ireland in the 2012/13 season when he scored against Portugal in a 1-1 draw in a 2014 World Cup Qualifier.

In 2013/14 McGinn was less prolific as he scored 14 goals in 44 appearances but the season was a much better one for Aberdeen as McInnes led the side to a 3rd place finish and European qualification in his first full season. McGinn also got his hands on the first silverware of his career as he played the full ninety minutes plus extra time as Aberdeen beat Inverness Caledonian Thistle 4-2 on penalties in the League Cup final.

In total McGinn would spend five seasons with Aberdeen, making 223 appearances and scoring 68 goals as Aberdeen took advantage of the demise of Rangers to establish themselves behind Celtic as the second placed team in Scotland but unfortunately McGinn couldn’t knock his former club off their perch. During this time McGinn’s international career continued to grow and he established himself as a regular feature in the Northern Ireland squad. At international level he may not be quite as prolific with just the 3 goals in over 50 appearances but he seems to have developed a knack for scoring important goals at that level as he netted the winning goal against Hungary in a Euro 2016 qualifying match, at the tournament itself McGinn played a part in all but the first of Northern Ireland’s four matches and scored the clinching second in the 2-0 victory over Ukraine. Just under a year ago McGinn won his 50th cap for Northern Ireland in a 3-0 friendly defeat against Croatia and as has become something of a tradition with the Northern Ireland national team, McGinn was given the honour of captaining the team for the game.

With McGinn’s contracting expiring at the end of the 2016/17 season it became clear over time he was unlikely to sign a new one and his final appearance for Aberdeen was the 2017 Scottish Cup final against Celtic. McGinn started the game and played 75 minutes before coming off but unfortunately McGinn suffered cup final heartache again as Celtic snatched an injury time winner to take the game 2-1.

In July 2017 eyebrows were raised as McGinn announced that he was signing for South Korean team Gwangju, and in doing so became the first Northern Irish player to have ever played in the K League, surprisingly. So far McGinn has made only four starts for his new club and is yet to find the back of the net and recent reports seem to indicate he may be struggling to settle in his new home but here’s hoping he can get back to the form we all know he is capable of soon.