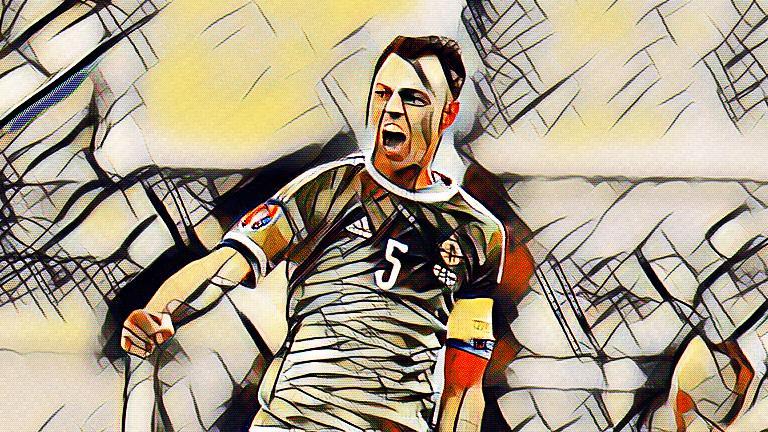 If gossip columns are to be believed then Manchester United are the latest club to express an interest in West Brom and Northern Ireland defender Jonny Evans. Manchester City were keen on Evans during the summer transfer window with Arsenal showing interest as January came calling but could a shock return to Old Trafford be on the cards?

Evans joined the youth ranks of Manchester United in 2004 and his family relocated to Manchester to circumvent FA rules that restricted clubs to youth players who lived within an hour and a half of their base. He was one of many United players to make the loan switch to Belgian affiliate Royal Antwerp, scoring twice in 11 appearances in the first half of the 2006/07 season.

It was while at Antwerp that Evans was given his Northern Ireland debut, despite not yet having made a senior appearance for his parent club. It was certainly a debut to remember as Northern Ireland achieved a second giant killing in as many years with a 3-2 victory over Spain who would go on to win the Euro 2008 tournament.

In December 2006 he returned from Belgium to sign for Sunderland on loan for the remainder of the 2006/07 season, managed at the time by former Red Roy Keane. Evans was part of the squad that gained promotion to the Premier League by winning the English Championship title. After a handful of cup appearances for Manchester United in 2007, Evans returned to Sunderland for a second loan spell helping the club avoid relegation and retain Premier League status.

A return to United saw Evans make his breakthrough into the senior squad but after 3 league titles, 2 League Cups, 4 Community Shields and a Club World Cup he was seen as surplus to requirements and sold to West Brom for a measly £6million in 2015. Joining up with fellow NI internationals Chris Brunt and Gareth McAuley along with Irish international James McClean, Evans became an integral part of the Baggies squad being appointed Club Captain prior to the start of the 2017/18 season.

Alongside his club ventures, Jonny Evans has to date attained 67 international caps including that infamous journey to France for Euro 2016 and the tragic falling short in the 2018 World Cup playoff.

Now 30 years old and in his prime, Evans is a coveted man. Naturally, there will be some scepticism that the reason Evans presents an attractive option to top level English clubs is that he helps fulfil home-grown quotas for European competitions. In reality, he has evolved to become a confident ball playing defender, a role much desired in the current game.

It is easy to see how Evans would fit into the philosophy of Pep Guardiola at Manchester City with his unyielding desire for playing the ball out from the back. Manchester United have struggled to maintain a consistent backline in recent years with players like Phil Jones and Chris Smalling spending more than their fair share of time sidelined through injury.

With West Brom reluctant to lose their skipper they have apparently placed a value of £25million on him. Of course this fee is seriously in the shadows of recent Premiership transfer fees it would represent the highest ever fee paid for a Northern Irish footballer. If Jonny Evans can replicate the path of his evergreen teammate Gareth McAuley who is still going strong at 38, then an outlay of £25million would be a seriously good investment for any club.

Evans has remained tight-lipped on his own future but it’s easy to imagine that another chance at Champions League football and indeed a fourth league title would be difficult to turn down. From a local point of view this will certainly be a story worth following as the Winter transfer window progresses.